So my welcome to Albufeira didn’t start out so good!!!  I got here about 1pm didn’t get to the room until 3 or after.  All because the bus station I thought I was coming into was the wrong one.

Turns out there is a new bus station just outside of town.  I ended up waiting for a bus to the center station which I thought again was the right one and it wasn’t.

Never did figure out what I did wrong!  Then I had to pay a cab $8 bucks to get here because I had no clue where I was.  All I can say is if you come here take a cab from the bus station it will save you money in the long run.

So it didn’t start out to be a good day.  The one good thing that happened to me that changed the direction my day was going.  Was I had to check in at the bar down stairs.

It wasn’t her fault management had screwed up what room I was supposed to be in.  She didn’t know which were or were not occupied so it was hit and miss.  Finally found one that wasn’t.

She was super nice and so said come down after you get your stuff in the room and have a beer on the house so I did.  Spent the rest of the day having a great conversation with her while she proceeded to bring out all kinds of different drinks from Portugal for me to try.

Had a great time with her probably would have stayed the rest of the night but her shift was over at 6pm. Good thing!  She never charged me for anything but I did leave a good tip.

She reminded me a lot of the girl I met in Faro the first day or two.  Just a real bubbly and happy person inside and out.  Had a good time laughing and carrying on with her so at least I had a good time that day after all.  This girl was young enough she could have called me grandpa! What a shame!!!  It did make up for the bad start of the day though!

The next day I went for a pretty long walk around town gathered up some groceries and headed up the hill.  Brought the stuff to the room and figured I would go to the  bar down stairs where the bartender was that I met the day before.

There were a  couple of British couples there when I got there.  Had a few drinks with them and was having a good time.  Was getting wasted but every time I started to leave they would buy more drinks.  Man the Brit’s can put down some pints of beer.

Then the guy that owns the place came in.  It was his birthday so he was buying all kinds of rounds of different drinks for everyone.  Here try this and this one and this one.  Then he started making appetizers to go with the drinks and then more drinks and more drinks.

It was a great time but am really feeling it today didn’t even go down to the bar today just incase they were there.  I really liked the people and a great  time was had by all!  I’m just glad all I had to do was get in the elevator and go up to my room!!!!  Couldn’t have made it much further!!

So the town is nice what little I’ve seen of it took me a couple days to get my bearings.  I stocked up with food and just relaxed a little.  Real nice little place.

I have another apartment now.  Just down the hill from the other.  This one has a good size living room, two sofa beds with beautiful balcony overlooking the sea, a tiny bathroom room with small kitchen and an upstairs bedroom, two twin beds with big window looking out at the sea and big bathroom.  Plus this year I am getting heated places and it is working out much better.

The first one with the nice bartender was up a long hill from here but also nice.  I was just trying to save one less hill to walk up.  Man they are killing me.  I will be in much better shape though when I leave here or dead one of the two.  HAHA!!!

Not bad for 25 EU a night HUH!!  The first one was 27 EU and had the nice bartender but that giant hill was a killer and this place is nicer!!!  Plus the SuperMarket is a short walk from here.  It is nothing but big pretty steep hills walking through this town everything is up and down crazy but pretty what little I have seen of it.

The big problem is both towns here in Portugal I have been to have had shitty WIFI!!  Ok if you just want emails but pretty much worthless for anything else unless you get lucky and hit it when it gets good for short periods.  I pretty much gave up trying to do anything on the website it was just too frustrating.  I decided I didn’t come here for that but to chill out and it just wasn’t happening playing with the site.

The site is a mess right now I am trying to separate photos into a year at a time instead of lumping them all in one.  Putting them all in one page made them too hard to load and to many to go though to get to the ones at the bottom.  I’ll get it done some time this year hopefully sooner than later.

Walked around town today and took some Photos not many because there just isn’t that much of interest here other than the views from the cliffs overlooking the sea.  There may be sites I haven’t seen but because of the many hills I didn’t walk as far around town as I usually do.

There are plenty of benches along the top of the cliff to sit at and stare off across the sea.  It is mostly older simple little stucco houses typical of Portugal.  With the white paint, red tile roofs and fancy chimney tops it all pretty much says Portugal.

One nice thing is there are no high rises.  There is a large pedestrian zone in the center of town with benches scattered throughout but it is mostly just a large commercialized district.  Not very much fun to walk through unless you want to buy trinkets and eat at higher priced restaurants.

There is a public bathroom at the top of that zone near the old bus station for all us old people.  They also have an elevator down to the beach from cliffs in one spot along the cliff walk.  I probably wouldn’t have stayed as long as I have other than the fact the weather has been cold and rainy off and on.

Just decided it was a good spot to wait out the weather because I have a gorgeous view of the sea from my balcony.  Plus the apartment is real nice and cheap.  This is their early part of spring so the good and bad weather is to be expected.  Next stop Seville!! 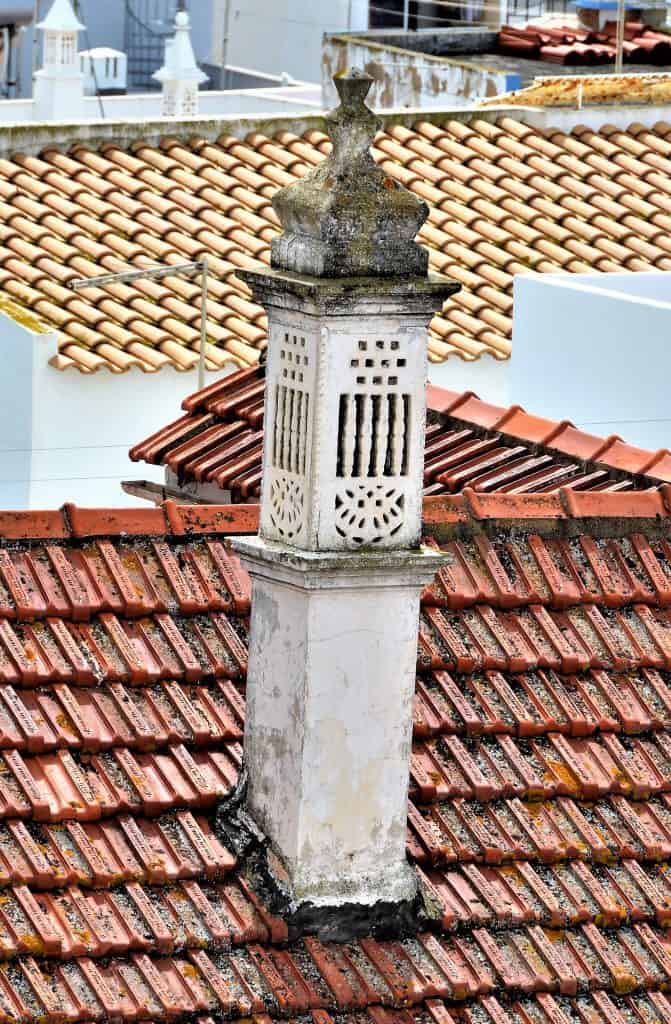 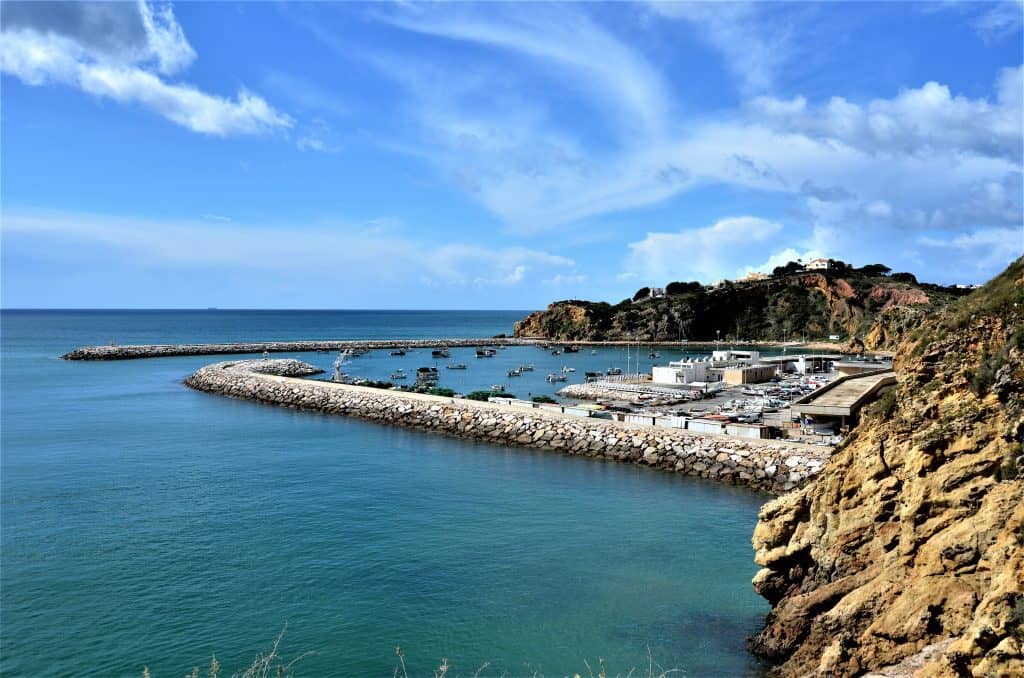 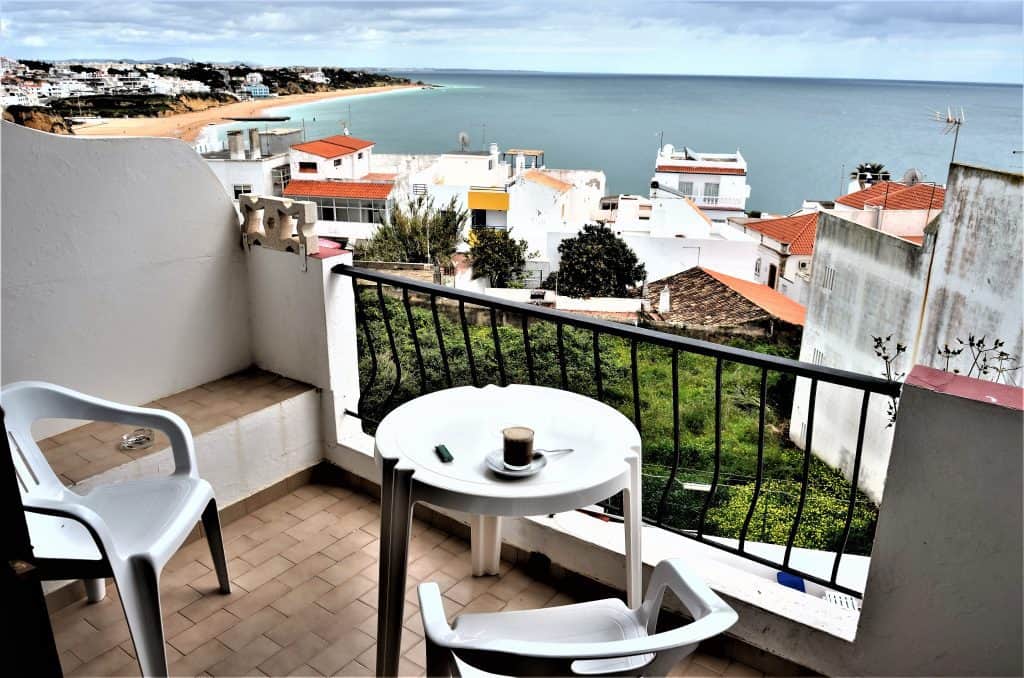 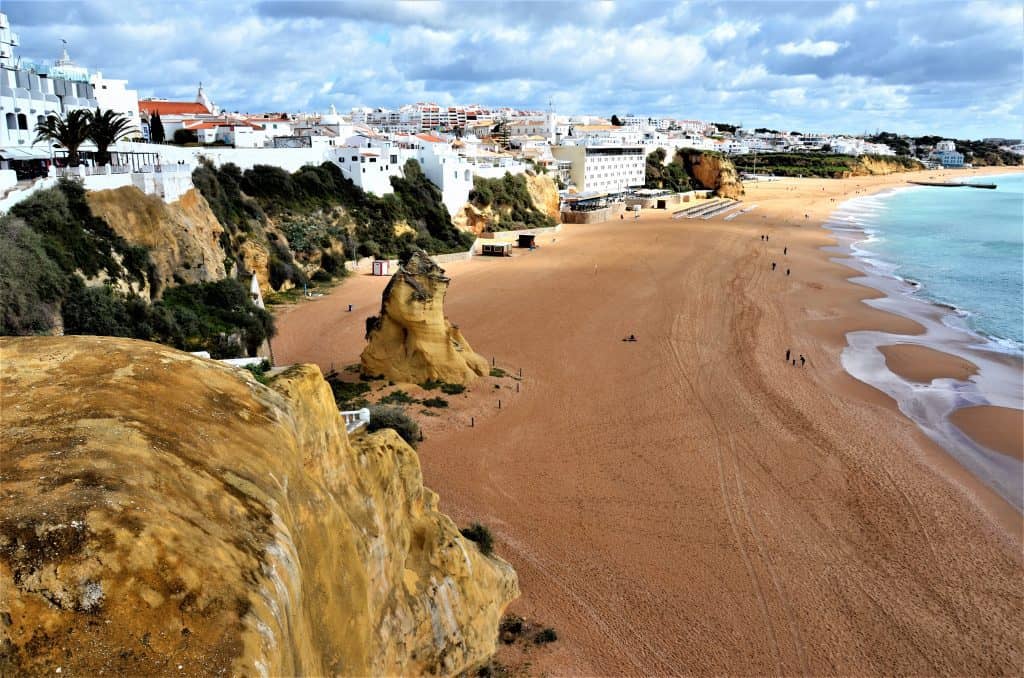 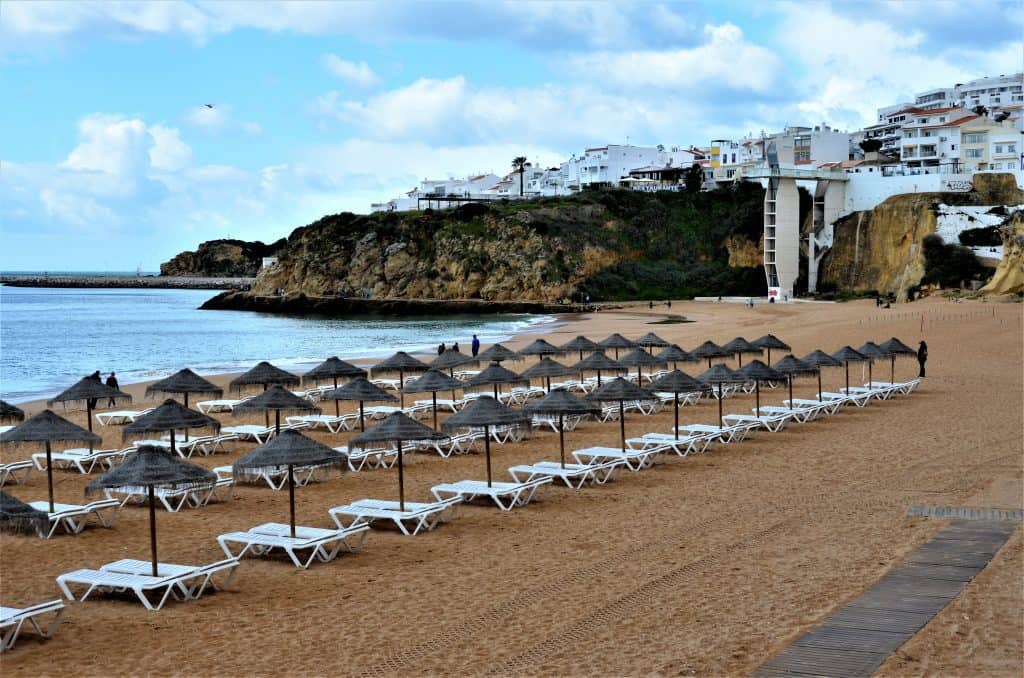 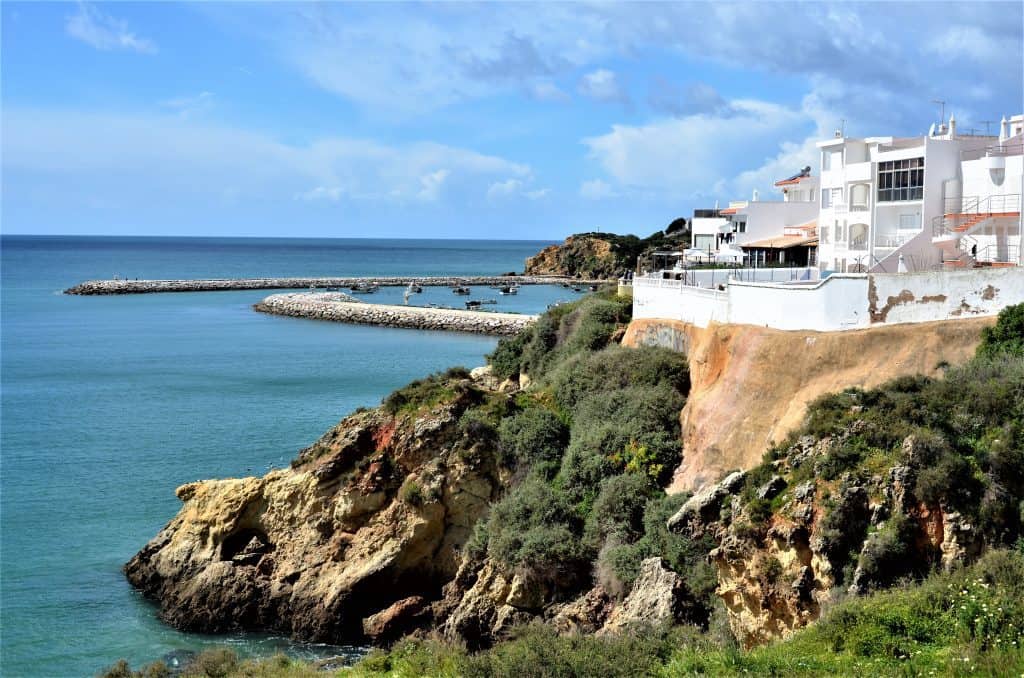 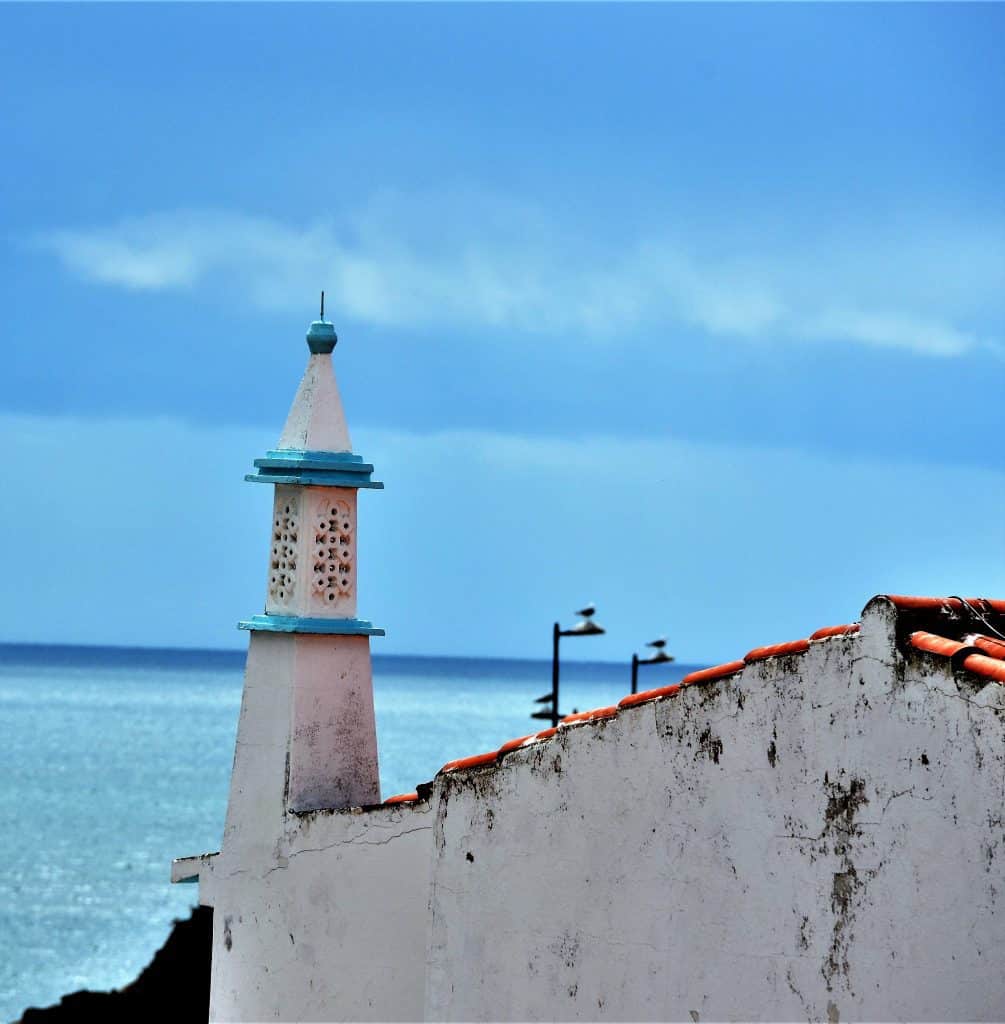