I went out with Victor and Carmen the young couple who manage this place this afternoon.  We went to a Tapas bar and had something to eat and drink sat in the sun and enjoyed each other’s company.  Then went to the new town and stopped in another sidewalk cafe along the beach.

Had a couple of more drinks and enjoyed the rest of the late afternoon it is now 8pm.  So it was more than the afternoon.  It was great they are two really nice people!!!  It was a real pleasant change of pace from my normal ritual.

They have their hands in all kinds of things from tour guiding to teaching young Swedish kids Spanish and Spanish living in the summer.  They also manage apartments and a few other things.  Nice to see that they are so very enterprising and very nice people.  Mellow laid back full of Life, Laughter and fun to be with.  Perfect afternoon!

They are having multiple parades of churches carrying the golden and silver pasos with the statues of Christ and Mary etc with bands and huge processions of people following.  They all start out in the afternoon and end back at the church they started at in the wee hours of the next morning.  Pretty long event.

There are 5 or so different ones everyday about an hour apart when they start and all go along the different routes hundreds of people involved.  Like the first one starts at 3pm and ends at 2am before it gets back to church.  Long Long procession!  Pretty cool!

Thought we were going to sit at a table and watch them come by but there are two cruise ships in town.  So the place was slammed with no place to park or sit so we went to a couple of places out of the way to sit.

The processions last all week with different ones everyday so tomorrow I will walk down and watch.  They are supposed to be incredible.  All gold and silver and life like statues.  I looked it up.  The following came from Wikipedia:

Spain is known especially for its Holy Week traditions of Semana Santa. The celebration of Holy Week regarding popular piety relies almost exclusively on the processions of the brotherhoods or fraternities. These associations have their origins in the Middle Age, but a number of them were created during the Baroque Period, inspired by the Counterreformation and also during the 20th and 21st centuries. The membership is usually open to any Catholic person and family tradition is an important element to become a member or “brother” (hermano).

Some major differences between Spanish regions are noticeable in this event: Holy Week sees its most glamorous celebrations in the region of Andalusia, particularly in Málaga and Seville, while those of Castile and Leon see the more sombre and solemn processions, typified by Semana Santa at Zamora and Valladolid. This is a religious holiday.

A common feature in Spain is the almost general usage of the nazareno or penitential robe for some of the participants in the processions. This garment consists in a tunic, a hood with conical tip (capirote) used to conceal the face of the wearer, and sometimes a cloak. The exact colors and forms of these robes depend on the particular procession. The robes were widely used in the medieval period for penitents, who could demonstrate their penance while still masking their identity. These nazarenos carry processional candles or rough-hewn wooden crosses, may walk the city streets barefoot, and, in some places may carry shackles and chains on their feet as penance. In some areas, sections of the participants wear dress freely inspired by the uniforms of the Roman Legion.[1]

The other common feature is that every brotherhood carries magnificent “Pasos” or floats with sculptures that depict different scenes from the gospels related to the Passion of Christ or the Sorrows of Virgin Mary. Many of these floats are art pieces created by Spanish artists such as Gregorio Fernandez, Juan de Mesa, Martínez Montañés or Mariano Benlliure. Brotherhoods have owned and preserved these “pasos” for centuries in some cases. Usually, the “pasos” are accompanied by Marching bands performing “Marchas procesionales” a specific type of compositions, devoted to the images and fraternities.

Pretty impressive I have seen smaller ones in other places but this one here has different ones every day this week.  Pretty cool stuff!  Brought my camera never thought to take a picture of us together.  Typical of me these days.  Will try to get some of the parade tomorrow.  Friday going to Marbella.  LIFE IS GOOD!!!! 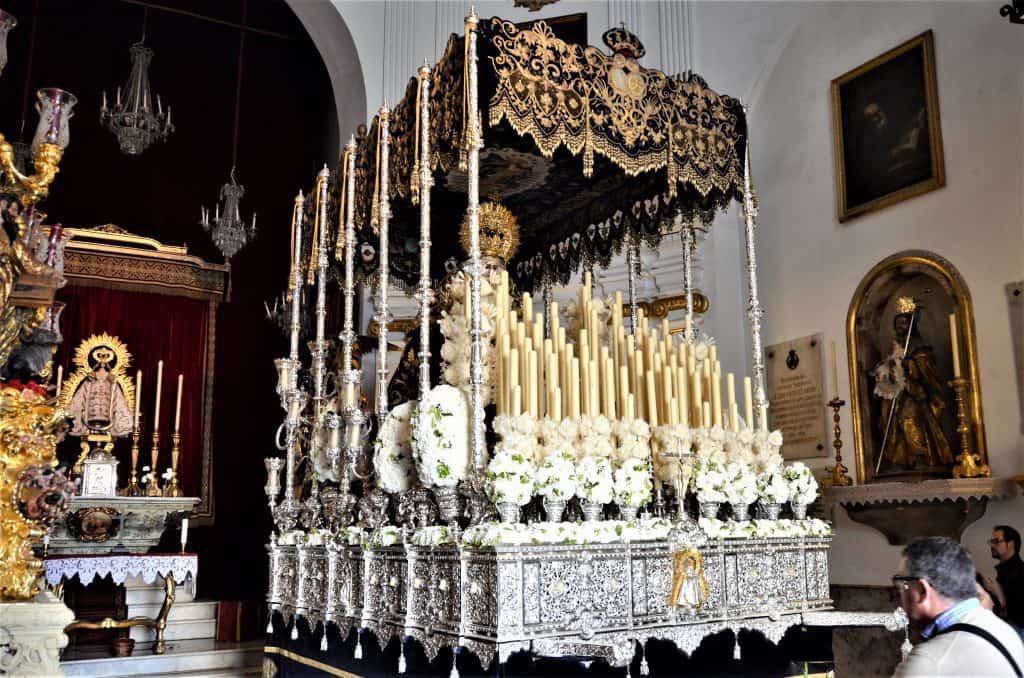 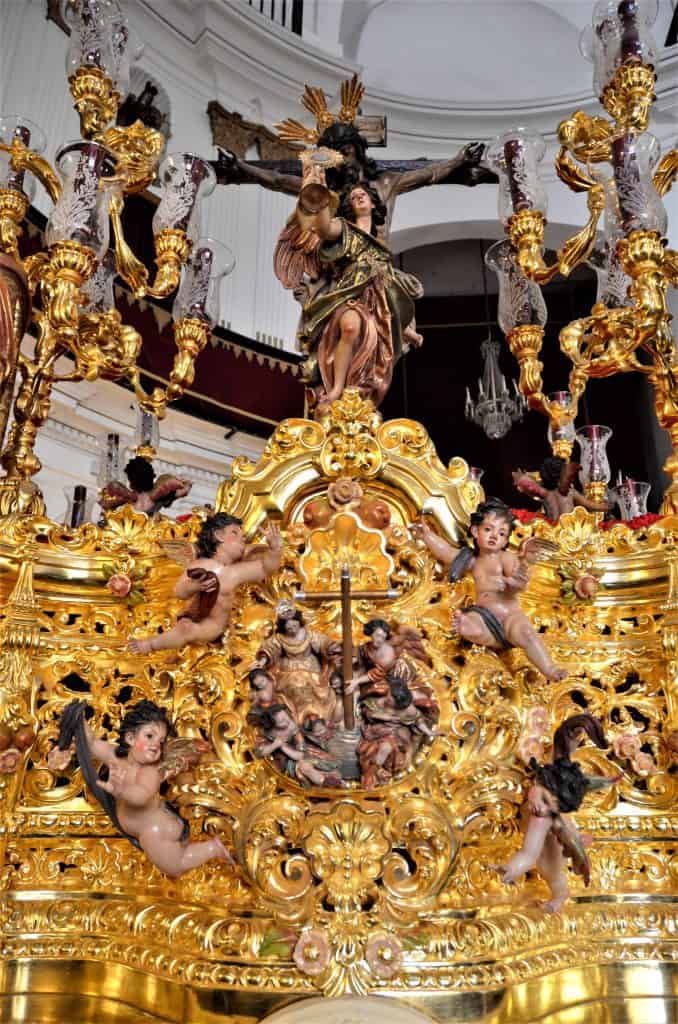 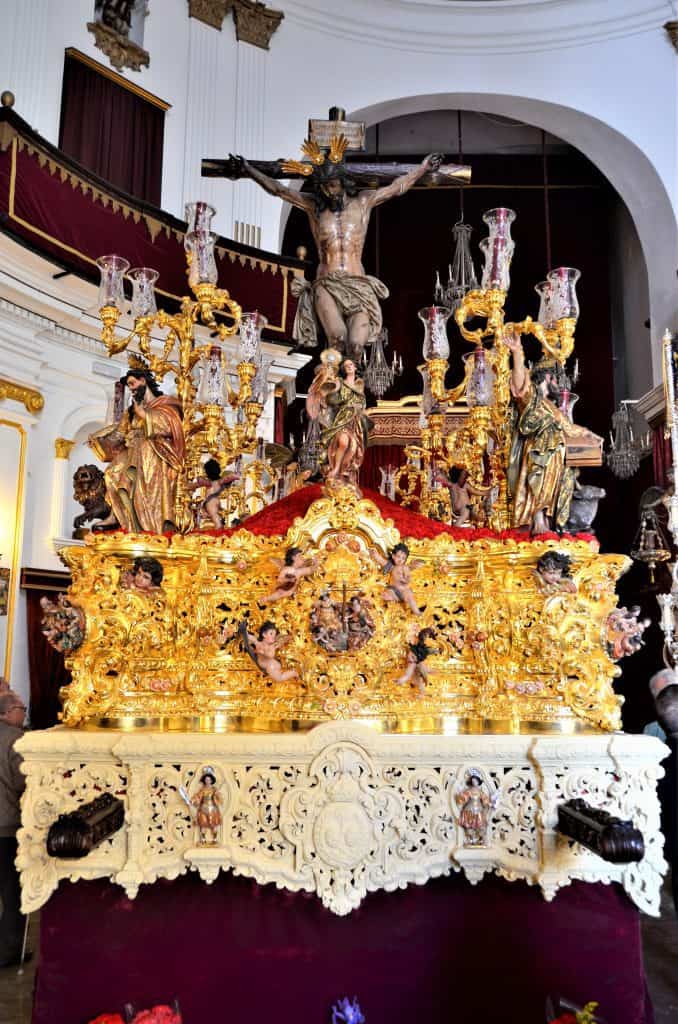 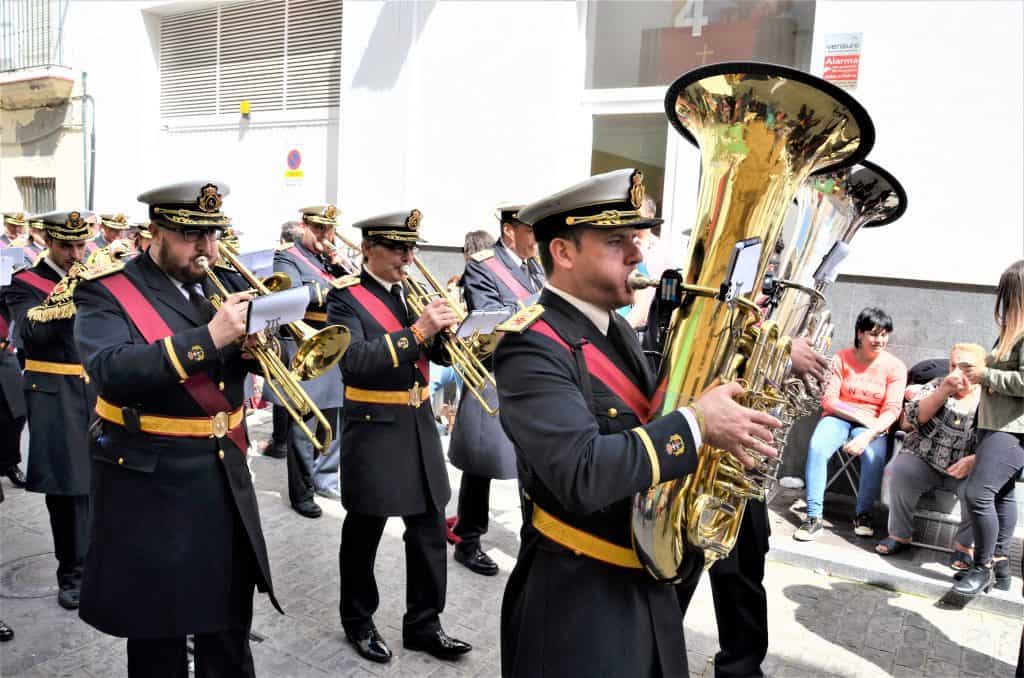 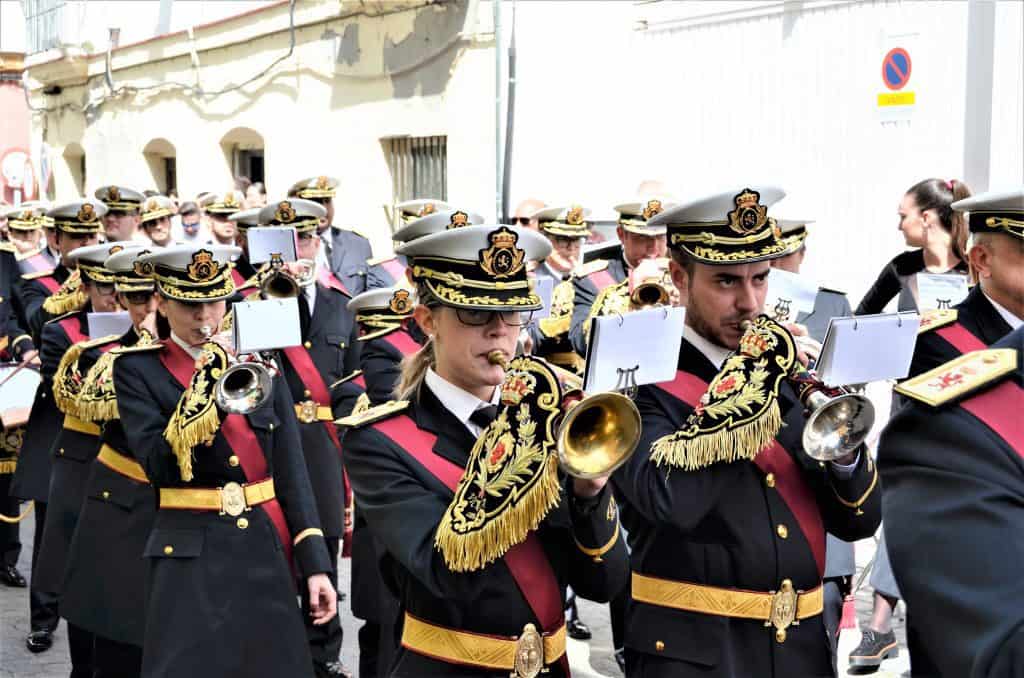 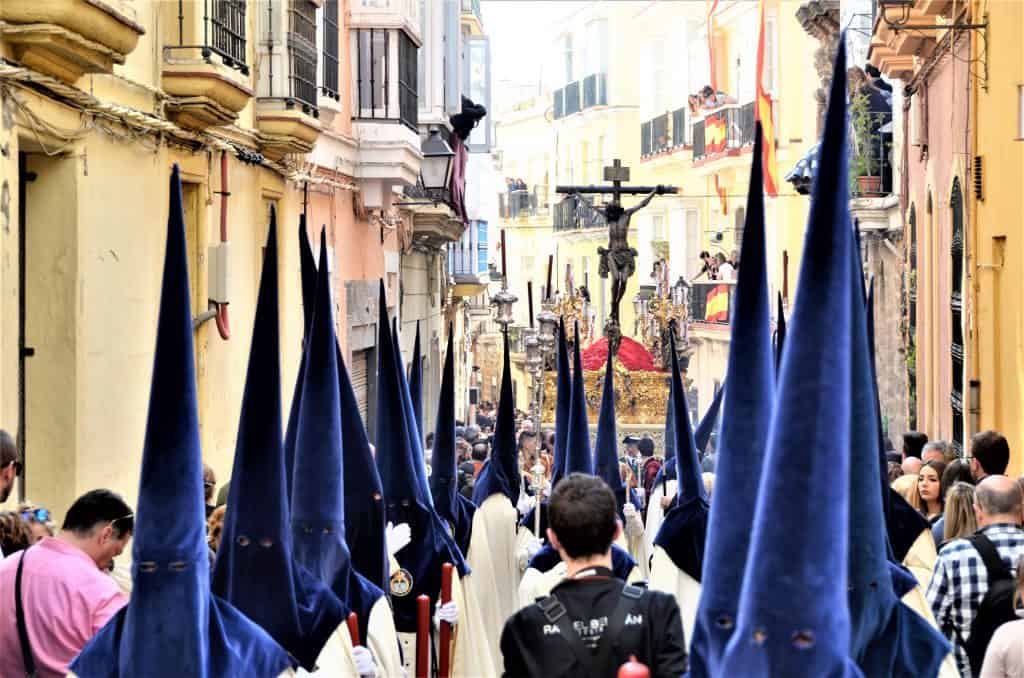 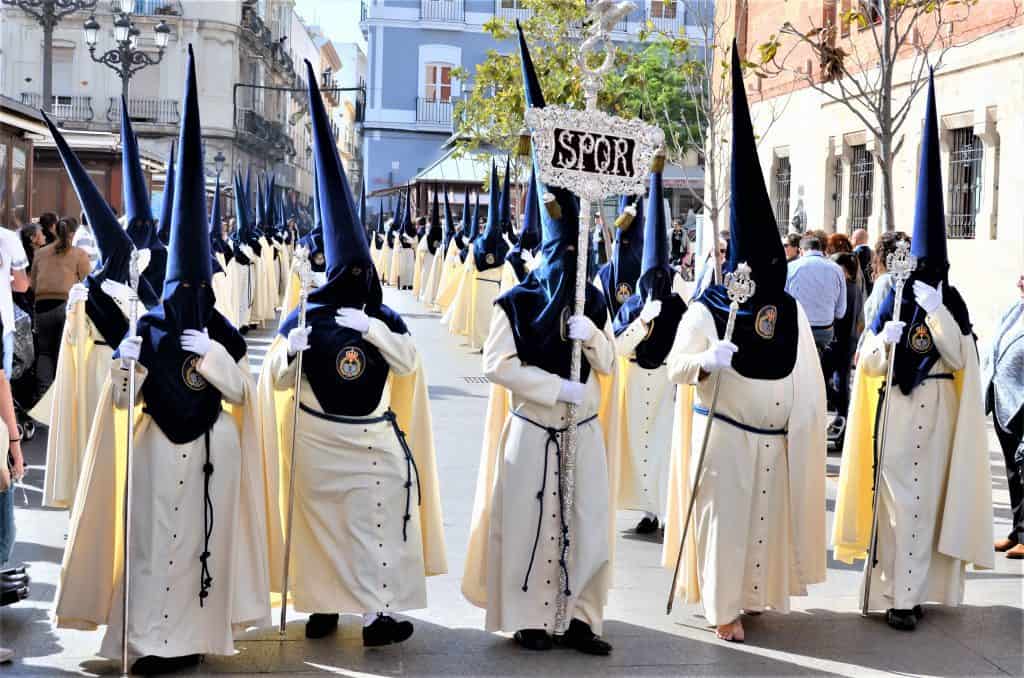 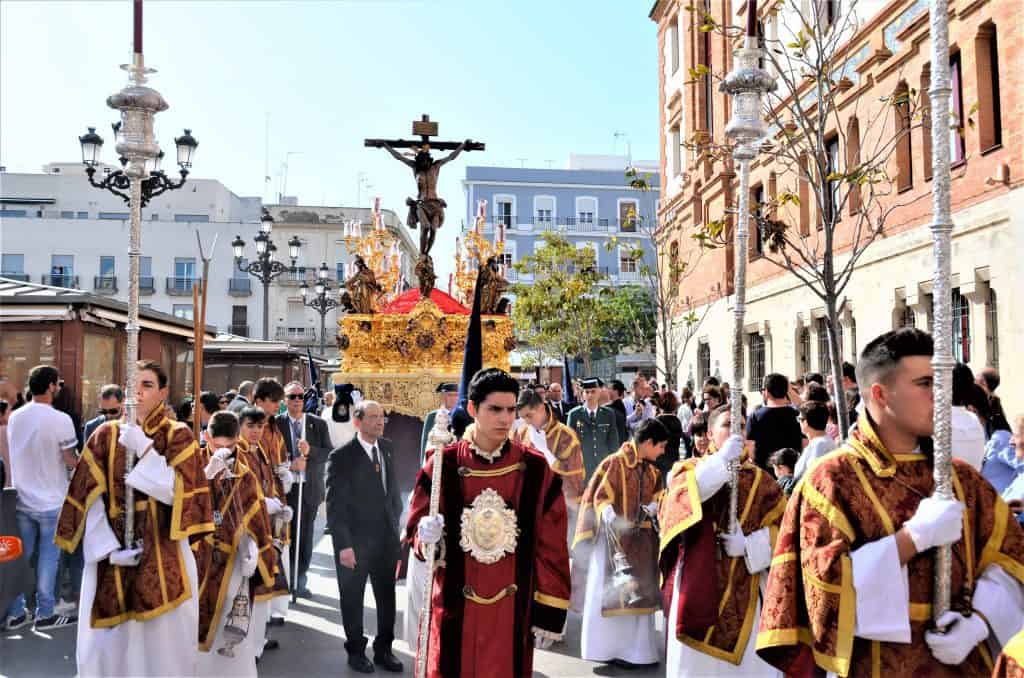 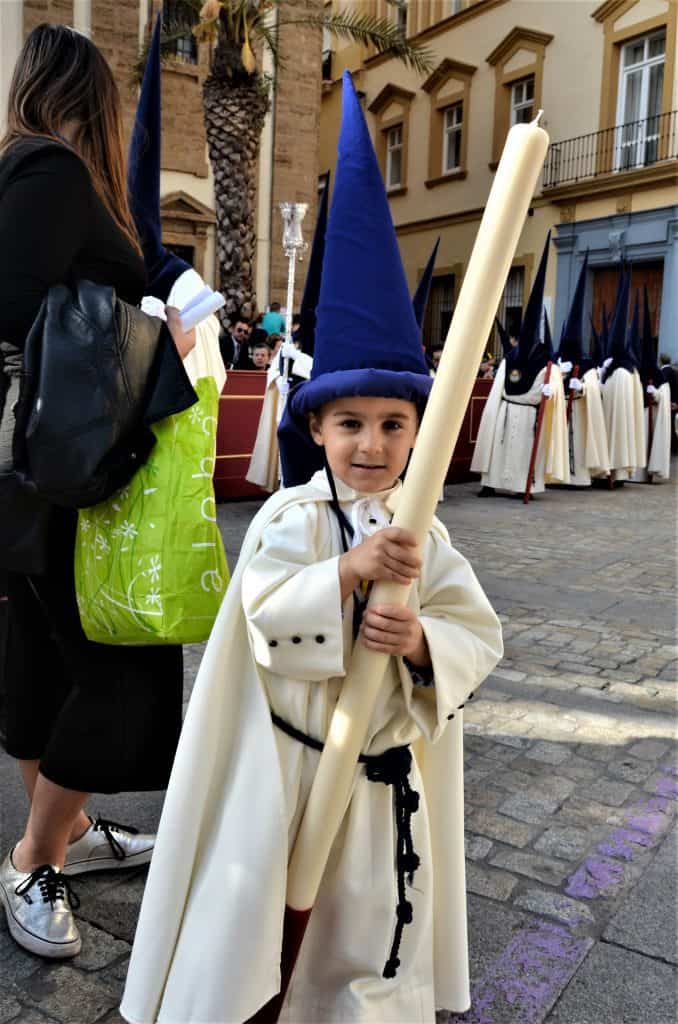 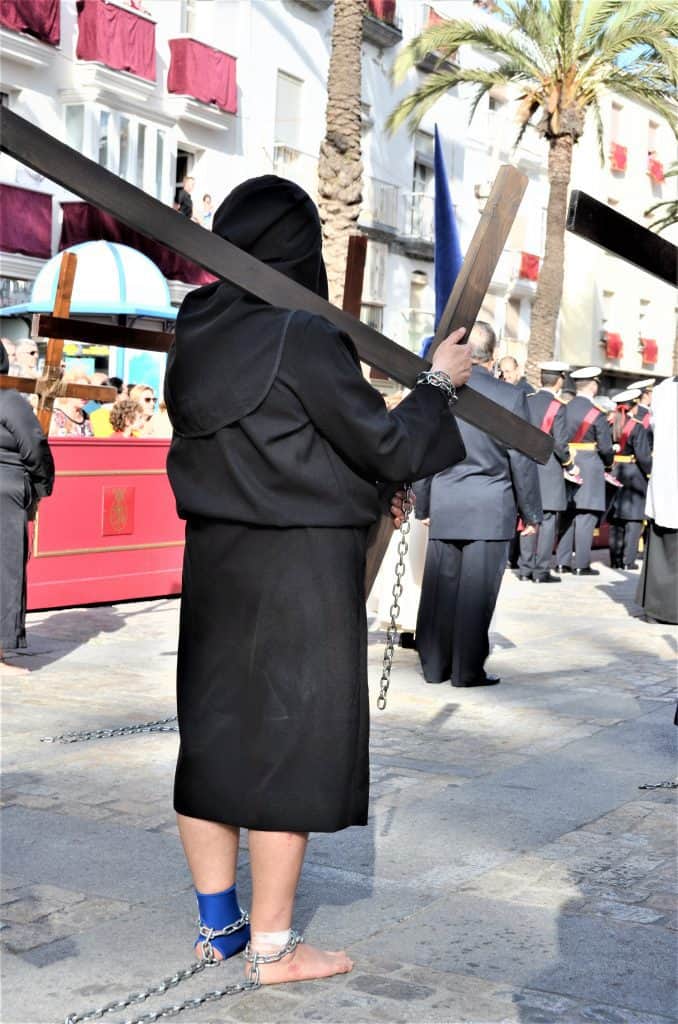 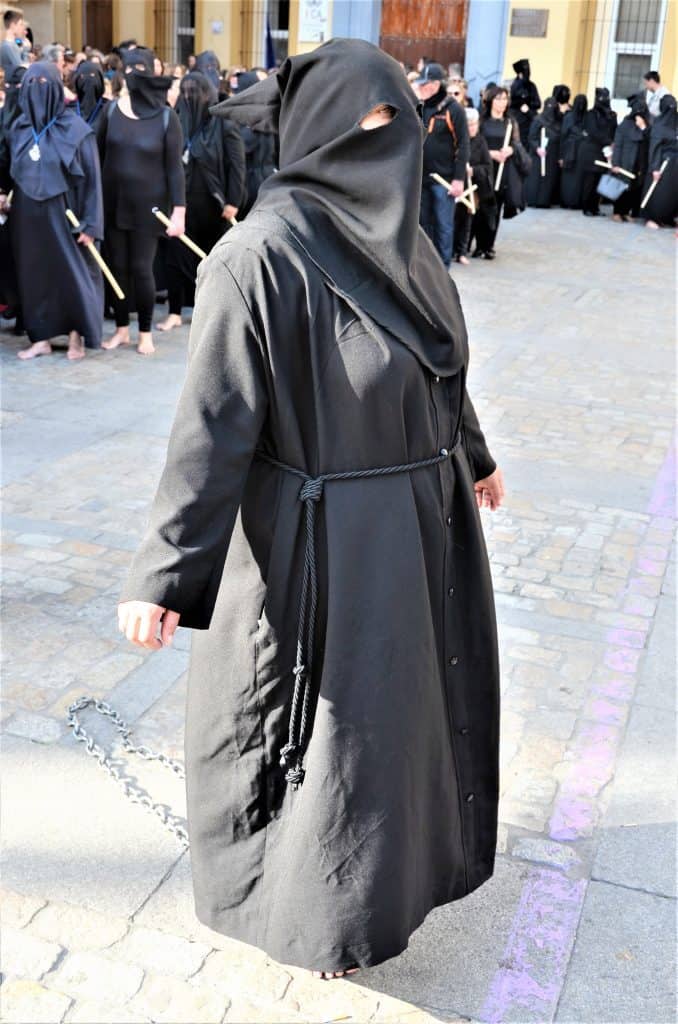 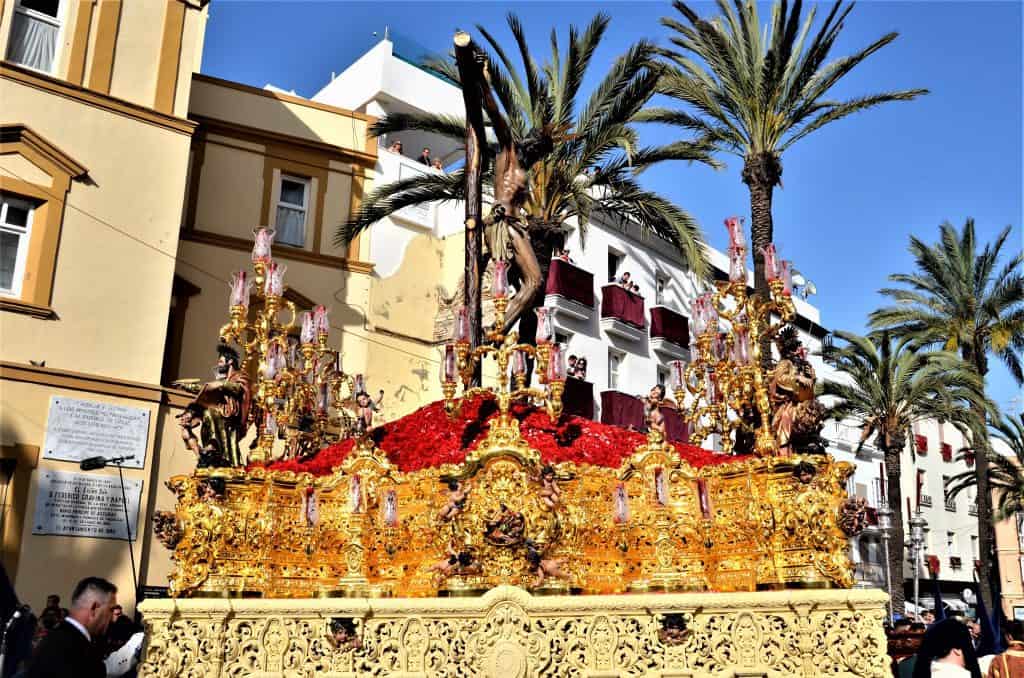 THIS IS THE CHURCH THIS PROCESSION ABOVE ORIGINATED FROM

Our Lady of the Palm

The Church of Our Lady of the Palm preceded by some time the miracle which made it famous. There is no exact record of why it was named that way.

The miracle for which it is best remembered took place during an earthquake and a tidal wave on the first of November, 1755. There had been an extremely strong earthquake on that day that was reported to have been felt throughout all of Europe. Cadiz is a seaport of Spain exposed to the Atlantic Ocean and was directly in the path of the tidal wave said to be more than 90 feet high. The recently reported tsunamis in Asia pale in comparison to that wave. Lisbon, with 275,000 inhabitants, was said to have lost 90,000 people and had 85% of its buildings destroyed from the wave. The water penetrated as much as 8 kilometers inland, mainly striking Portugal, Spain and Africa.

The townspeople of Cadiz were in terror and were on the point of abandoning the town when two unidentified men – thought later to be the patron saints of the city – closed the water gates and urged the people to go to the Capuchin Church of Our Lady of the Palm. Here a Mass was in progress. The priest calmly finished the Mass, seized a banner with a picture of Our Lady on it, and went out into the street where the wall of water was already advancing upon them. He planted the banner in the street almost in the shadow of the great wave and called out in a loud voice, “Thus far, my Mother.” The water advanced as far as the banner, and then miraculously stopped its forward progression, even though up until that point it had destroyed everything in its path. Then, as the priest walked boldly forward toward the wall of water with the banner in his upraised hand, that gigantic wave receded from him and turned away from the face of Mary to return placidly to the ocean.

An anniversary procession was established, along with a confraternity of Our Lady of the Palm. With the exception of 1837, when there was a Civil War, the procession was held annually. The rosary was recited along the route of the tidal wave, and prayers of thanksgiving said.

*from The Woman in Orbit and other sources